“A Tale of Three Chinatowns” raises concerns about neighborhoods’ survival 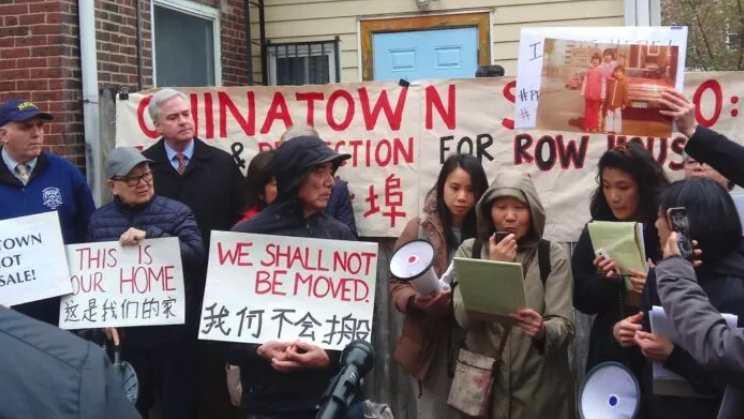 SAMPAN by SHIRA LAUCHAROEN (June 24, 2021) – “A Tale of Three Chinatowns” is a documentary film screened through the Roxbury International Film Festival, in partnership with the Shared Stories series at ArtsEmerson. The movie, which focuses on the survival of Chinatowns in Boston, Washington D.C., and Chicago, will be played from June 23-27. It explores the persistence of Chinatowns in these cities, examining their roles as cultural gateways and as homes to communities of immigrants. Due to urban development and gentrification, many of these districts are fighting to keep their cultures alive.

“I do feel like [they are] cultural touchstones, not just for Asian Americans, but for immigrants, or for anyone, quite frankly, who is interested in Chinese and Asian culture,” said director Lisa Mao. “As we discuss in the film, these neighborhoods and these communities were created out of racism and segregation. It was like a forced sanctuary of sorts. When you look at American history, it’s not surprising, and it’s not unusual. Even during the Revolutionary Era, most groups that came to this country collected together in what was familiar. It was not unusual for national groups to come together in their adopted country, their new homeland. But for Chinatowns, over time, they’ve really evolved. They are a living, breathing organism, just like most places. I would say that today, yes, they do serve as a touchstone of sorts.”

The film studies the distinctive characteristics of each of the three Chinatowns. In Washington D.C., the neighborhood has undergone shrinkage, with a current population of 300 residents of Chinese descent. In stark contrast is Chicago’s Chinatown, which has managed to expand its borders and grown in size, and meanwhile, Boston, with an established activist community, has remained somewhere in between. In the film, professor Andrew Leong of the University of Massachusetts Boston points to the problem of “Disney-fication,” the process by which national chain stores take over a neighborhood and displace small, local businesses. “Disney-fication” was a term that he first used after visiting Washington D.C. in 2013. In response to the gentrification and status of Chinatowns as tourist destinations, Leong poses the question, “who is Chinatown for?”

“[There was] the growth of national chain stores — Starbucks, Walgreens, cell phone stores, chain restaurants. At the same time, [there was] the decline and loss of local Chinatown restaurants, bakeries, grocery stores, small mom and pop service, and personal beauty or salons,” Leong told Sampan. “How does this relate to a ‘Disneyfication’? By the time city planners in D.C. figured out that D.C. Chinatown was on its last legs, they determined it was fit to mount some actions to save Chinatown. One such action was the passage of an ordinance requiring Chinatown businesses to have their business signs transliterated from English to Chinese. That is the ultimate example of a ‘Disney-fication’ move since it begs the question of, ‘who needs to see signs in Chinese for non-Asian stores?’ Do we really need to know what Fuddruckers, Legal Seafood, Hooters are in Chinese? The obvious answer is the tourists — since it would be their expectation to have some demarcation that they are in Chinatown.”

Lisa Simmons, artistic director of the Roxbury International Film Festival, said that the team picked “A Tale of Three Chinatowns” to screen based on the festival’s mission of celebrating the stories of people of color and opening conversations about multiculturalism. She expressed the hope of seeing more work about the disenfranchisement of immigrant populations and the process of urban development. “Gentrification is an ongoing problem, and people across communities must learn to support each other in the preservation of cultures that are currently at risk,” said Simmons.

“I want people to understand that this is how communities get lost,” said Simmons. “This is how cultures get taken away. If we’re more aware of it when we’re in those spaces and we’re paying attention to what’s happening, I think that we need to do that. Because it doesn’t have to be that way, and people say, ‘I don’t live in that community, so it doesn’t matter.’ But it does because you come into that community for culture. You come into that community for food, and that’s not going to be there. So it’s everybody’s issue. Everyone should be focused on it.”